The yellow tube at the top of the photo is a
Takahashi Epsilon-18 astrograph. The light
sensing device (CCD) is mounted on a
package in the lower right with its housing
on the lower left.

We are currently seeking funding to support the design, construction and operations of the ATLAS system. We have written a grant proposal to the NASA Near Earth Object Observations program and expect to hear within weeks whether they will provide funding. Competition for the NASA funds is tough and even though we think that ATLAS is an important and revolutionary system there are other excellent NEO surveys currently in operation that are also deserving of support. Thus, we are also seeking funding from other governmental sources, private donors and corporate sponsors. Please email us if you have contacts that could help raise funds to support ATLAS development and operations. In the mean time we use our 'spare time' to study some of the key ATLAS hardware and software problems. In particular, the extreme wide-field camera and the Moving Object Processing System (MOPS):

An ATLAS prototype camera is nearing completion and will be mounted on a Takahashi Epsilon-180 astrograph. The image on the left shows this telescope (the stubby yellow tube) and the microcam-3 cryostat that houses a pair of 8 megapixel, high sensitivity CCDs. The camera is undergoing vacuum tests and the CCDs are being wired to the controller that reads them and writes their data to a computer. The full ATLAS system will incorporate eight bigger telescopes and will be correspondingly much more powerful than this prototype. The prototype will allow us to begin taking real observations of the sky with a camera that is very similar to the one that we will eventually use with ATLAS. More importantly, the prototype allows us to develop the image analysis software to analyze the extremely wide-field, big-pixel, and rapidly-acquired images. 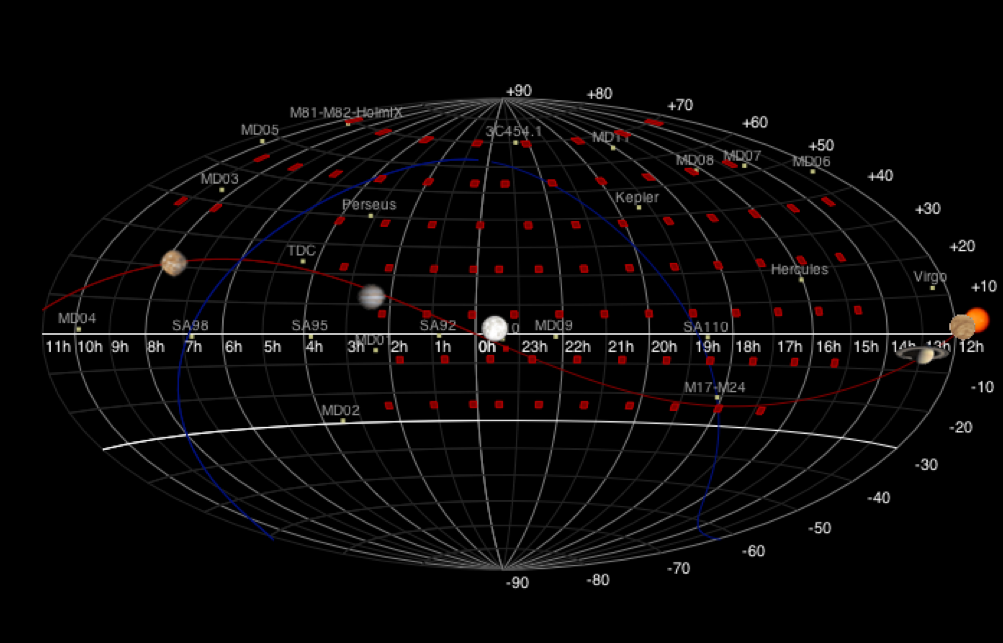 A map of the entire sky showing the center of the
ATLAS survey simulation fields (as red squares)
on a single night. ATLASsurveys the entire visible
sky twice each night. The regions without the red
squares are either below the horizon as seen
from Hawaii or only above the horizon during
daylight.

We have used the Pan-STARRS Moving Object Processing System (MOPS) to simulate the ATLAS survey. We run simulations to learn how the system will operate and how to design the survey, camera, and software to be most efficient at detecting incoming asteroids. MOPS has a synthetic (fake) set of asteroids that we have generated that we know will strike the Earth. We simulate the ATLAS survey by asking the simple questions 'Which object will be in each field? How bright will they be and how fast will they move? Are they bright enough to be detected by ATLAS?' The figure on the left shows the ATLAS field locations (red boxes), and the Sun, Moon and major planets distributed along the ecliptic (red sinusoidal curve). We are still working on tweaking the surveying pattern and MOPS configuration to tune it to ATLAS but we already know that ATLAS can detect essentially 100% of the asteroids in the night time sky that will impact the Earth in the coming days and weeks (that are brighter than ATLAS's faintness, or magnitude, limit).